Update on DACA Processing Under the Biden Administration 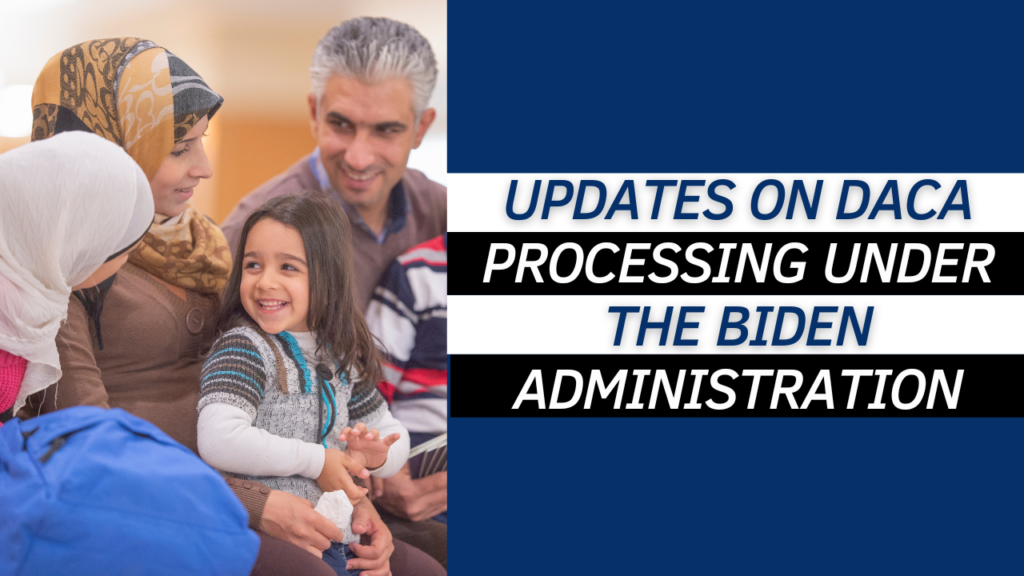 The new final rule for DACA will codify and fortify the program, originally enacted only through an executive order in 2012 by Former President Obama.

As you may know, the program has been up against several lawsuits – the latest of which prohibited the grant of new DACA applications but allowed the renewal of existing recipients.

Now, the current administration has finalized a new rule that will once again allow the Department of Homeland Security (DHS) to process NEW applications for DACA. This rule will take effect on October 31, 2022, provided no other legal dispute arise.

The new final rule retained the initial threshold criteria of DACA since 2012.

The final rule indicates that:

The proposed policy originally planned to change the process of DACA by making the request for employment authorization on Form I-765, Application for Employment Authorization, OPTIONAL.

However, in the final rule, it retained the requirement of filing the work authorization application concurrently with the DACA application (referred as the “bundled process”).

However, it clarified that work authorization IS TERMINATED when your DACA status ENDS rather than having it end upon the mere commencement of removal proceedings for you.

Update #3: Those with DACA status are considered “lawfully present”.

The final rule considers those granted deferred actions as “lawfully present”. While it does not confer lawful STATUS, it helps you not to accrue “unlawful presence” while under DACA status. This is essential for certain admissibility rules for non-citizens.

Update #4: Certain offenses do not automatically disqualify one for DACA.

DHS clarified that “expunged convictions, juvenile delinquency adjudications, and immigration-related offenses such as felonies or misdemeanors” do not automatically disqualify or make you ineligible for DACA.

Update #5: USCIS retains the termination of DACA upon its discretion.

The final rule retained that DACA may be terminated any time by USCIS upon its discretion, BUT subject to the issuance of a Notice of Intent to Terminate or NOIT. The same applies to those who left the US without an advance parole and re-entered without inspection.

However, to those convicted of national security offenses, their DACA status may be terminated even without a NOIT.

Additional Note! The DHS, however, clarified that existing recipients do not need to request for DACA again under the new rule to retain their grants.

If you are a new applicant of DACA and are confused on what steps to take or uncertain of your eligibility, leave a message below or schedule a consultation with us and our experienced DACA attorneys at Andres Mejer Law will guide you through your immigration journey.

If you need help with your immigration case, call our office to speak with an experienced immigration attorney in New Jersey. We can help you file your green card application, prepare your affidavit of support and other required documents, assist you in applying for citizenship, and dealing with the complicated green card and visa requirements USCIS requires. If we can’t help you, we won’t take your money.

Welcome To America: An Immigrant’s Story: Immigrant Shooting survivor: U-Visa Process, U-Visa Solutions and what you should do Question 1 END_OF_DOCUMENT_TOKEN_TO_BE_REPLACED

Let us imagine that your Form N-400, the Application for Naturalization, has been approved. You have also attended and passed END_OF_DOCUMENT_TOKEN_TO_BE_REPLACED