What country sends to the US the most new citizens?

Where do our Naturalized Citizens come from? 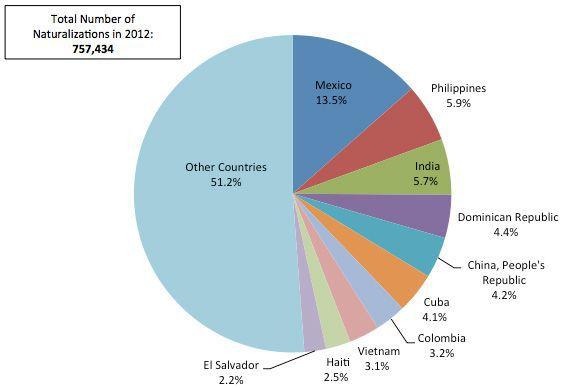 This chart, also provided by the Migration Policy Institute, shows that from 2000 to 2012 Mexico has remained the top country where naturalized U.S. citizens were born.  The Philippines and India replaced Vietnam and China.

How many people do naturalize and how many more can do so?

The changes in immigration patterns, doesn’t change the simple fact that Naturalization to the U.S. has become harder.  This has to do with the increasing complexity of immigration law.  Over the years, rather than reform the entire system Congress has seen fit to create a patchwork of statutes than then have to be read in conjunction with prior acts.

When this nation was first founded, almost anyone who was able bodied was able to enter the country and work for a living.  This has changed, and is one of the main reasons why immigration reform is needed. Over the past 100 years many laws have pas creating a tight web of restrictions that immigrants must now face.

How long does it take to Naturalize in NJ?

I can attest from personal experience how it has gotten harder over the years.  It also takes longer.  The process for getting one’s citizenship takes longer today in most states than just a decade ago.  In New Jersey, if you file a petition today for your citizenship it takes on average between four (4) to six (6) months until your interview your becoming a U.S. citizen.

Deciding on an immigration lawyer can feel like an overwhelming situation. You’re investing your time, money and, even your END_OF_DOCUMENT_TOKEN_TO_BE_REPLACED

I have decided to create this article to guide you when choosing an immigration attorney. I’m going to review the five END_OF_DOCUMENT_TOKEN_TO_BE_REPLACED