What do Trump’s statements mean for you?

What do Trump’s statements mean for you? 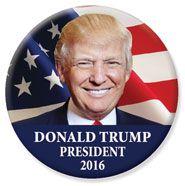 Donald Trump’s recent declaration that he wants to register all Muslins in the U.S. into a national database and stop all Muslim entry into the United States has a lot of people nervous, and with good reason.  This man has been leading in the polls for months now, and many people are worried that his election would mean a collapse of our country’s immigration network.  However, there is hope with regard to this statement.

The US will not prohibit immigration of Muslims

This plan of his, while racist and offensive, has no possibility of actually happening.  We are a nation of laws.  We have a constitution and a Bill of Rights.  This country was built on religious tolerance.  For the U.S. to suddenly discriminate against an entire group of people, well that is not the America I know and love.  Not only is the plan completely unconstitutional and illegal, but members of congress would be committing political suicide to support this plan.  Members of Trumps own party, the Republican Party, have already come forward to state that they not only condemn this statement, but now also condemn him as a candidate.  He truly has gone beyond the fold.

We have become a polarized country

The problem that we are facing now is that our nation is becoming very polarized.  What this means is that people are viewing themselves more as a respective political party than as a person with their own views.  Because of this, many people that would not normally have anti-immigrant views are adopting these views because they believe that it is what their political party believes.  Unfortunately, the moderate politicians (in both party’s) are less in number than even a decade ago.  That means that the loudest voices in the left or right of the political spectrum are getting the most attention.  Even in the Republican Party, polls show that the majority of Republicans want immigration reform.  The polls differ what the reform consist of, but the overwhelming majority want to address the millions of undocumented immigrants in the U.S. and give those that qualify some form of legal status.  However, the loudest voices, today that would be Trump, only talks about enforcement of the laws (that’s code for deportation) and no actual constructive reform.  Clearly Trump doesn’t represent the majority of Republicans on this issue, polls have been consistent on this.

The unfortunate thing about these statements is that they reflect the ideals of many Republicans, if not the party as whole.  While not every candidate has ideas as extreme and radicalized as Trump, they do tend to hold an anti-immigrant and anti-Islam stance.  If a republican candidate were to be elected as president we could see a great deal of our immigration policy change, and not in a good way.  For this reason, anyone who is in the process of immigrating to the United States needs to finish the process as soon as possible.  Nothing is likely to change in immigration immediately after a new president takes office, but in 2017 to 2018 we could see some significant changes.  Hopefully for the better, but that all depends on the outcome of the election.

Stay up to date with immigration news!

However, our nation is no doubt moving towards an era during which there are going to be some immigration changes, and it is very important that you stay up to date on these changes.  Therefore, we recommend that you do all that you can to stay up to date with the changing immigration laws.  Firstly, check back to this blog every week to see what new content we have posted.  If anything major in the world of immigration changes, you will be able to find it here.

The Safe and Secure Program can help you prepare

Checking our blog is only half the battle.  The next thing you should do is make sure that you fully understand your rights.  You have a lot of rights as a human being, regardless of your immigration status, and it can be very easy for these rights to be violated.  That is why we at Andres Mejer Law started the SAFE program.

This program helps to minimize your chances of being arrested for any crime or immigration violation. With this program you receive an ID card that you can keep with you at all times and present to an officer if you are ever stopped.  All you have to do is present the card to the officer and inform them that you will not answer any questions without your lawyer present. This makes it clear to the police officer that you are legally represented and know your rights.  In order to ensure that you do know your rights, there is a list of your constitutional rights on the back of the card, as well as 24/7 phone number that is manned by an answering service. When you purchase this package you also receive a 30-minute consultation with one of our attorneys every year, free of charge.

We also offer the SECURE program, which applies specifically to immigration issues.  If you were detained by immigration, your family normally would need to scramble to find you legal representation.  Once a lawyer has been found for you, there will need to be multiple trips back and forth to the detention center to figure out your immigration options, have you fill out paperwork, and prepare for court.  What our SECURE program does is ensure most of this is taken care of beforehand.  We run a criminal background check to make sure we know what a police officer might now, we also check all of your immigration information to find out what ICE knows.  This allows us to be as efficient as possible and avoid unpleasant surprises.  It also lets us fix any potential problems before it you are in custody.

Now, the SECURE program comes with several benefits. You get:

In total, this package is worth almost $10,000 you can get it for a fraction of that price, because you will prepare in advance.  Not only will you saving thousands of dollars but you will be increasing your chances of success because if you are detained we likely can’t fix any issues that come up in your criminal or immigration background.

At Andres Mejer Law, we want to make sure that every immigrant in our community is taken care of.  After all, we are just that, a community.  With the tides of our nation’s political system changing every day, we have no idea how long it will be until we see some new and helpful immigration policies.

Don’t wait for Trump, get Safe and Secure today!

Don’t wait to get started.  Make sure Trump can’t hurt you.  Make sure if you qualify for an immigration benefit you get started on our Safe and Secure Program today by:

At AML we protect immigrants, one Safe and Secure Program at a time.