‘What are my kids going to do?’ Long Branch father faces deportation

USAToday – By Steph Solis – Carlos Larios held his daughter close as she fidgeted with her pink headband. 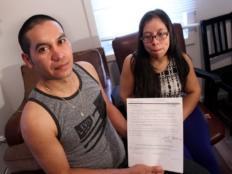 Kimberly turns 4 years old in July. She’s too young to understand that by then her father might be gone.

Larios, 31, of Long Branch, is an immigrant from Guatemala in the U.S. without legal status. He’s expected to report to Immigration Customs and Enforcement in June in Newark, where he will likely be deported. He’s one of an estimated 500,000 immigrants living in New Jersey without legal status.

“What are they going to do without me?” Larios, a married father of three who works as a painter and drywall installer, asked in Spanish. “What are my kids going to do?”

Families like Larios’ grapple with the ripple effects of losing the breadwinner as lawmakers bitterly contest the effects of deporting the estimated 11 million unauthorized immigrants.

Without Larios, his wife and children fear they will likely sink into poverty and seek government assistance, for which his two U.S.-born children qualify. Larios has paid income taxes on his wages since 2010, but that will end if he is deported.

The fallout isn’t limited to Larios’ family. His employer, Jay Harvey, said he would have to close his small construction company and lay off the two other employees if he loses Larios; in the past five years, Larios has been the only candidate who he feels can lead the business. One employee is Harvey’s grandson, who works to help pay for his education at Monmouth University in West Long Branch.

Can you extend your stay if you are a non-immigrant? Absolutely! And we’re here to show you the right way END_OF_DOCUMENT_TOKEN_TO_BE_REPLACED