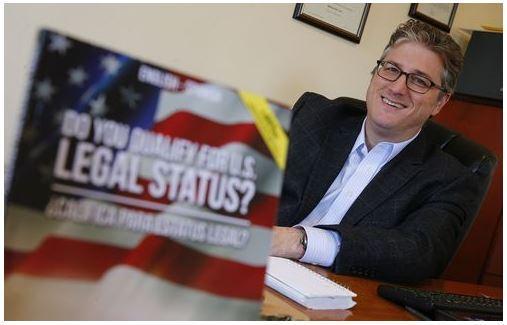 “Chaos, fear, uncertainty is kind of the only way you can categorize it,” said Mejer, 41, an immigration attorney who has offices in Lakewood and Long Branch. “We’re getting a lot of phone calls from people who just say, ‘What should I do now? What can I do?'”

His clients could have a variety of reasons to worry.

First there was the Trump executive order, since stayed by the federal courts, barring citizens of seven Muslim-majority countries from entering the U.S. for the next 90 days and suspending the admission of all refugees for 120 days. It caused chaos at airports around the country and abroad.

Then there were the weekend raids conducted by U.S. immigration authorities in at least seven states including New York; they netted hundreds of undocumented immigrants, the vast majority believed to be felons convicted of serious crimes.

Such enforcement occurred under President Obama as well, but these were the first major enforcement actions under Trump, who ran on a shifting platform that called for removing the 11 million people living in the U.S. without authorization.

For Mejer, the issue is personal. He came here with his family from Santiago, Chile, at the age of 5. “For 10 years we lived here illegally,” Mejer said. He gained his citizenship in 1999.

“It’s a constant feeling of paranoia,” said Diego Mendez, 21, who works in Mejer’s office and has received protection from deportation through Deferred Action for Childhood Arrivals, an Obama Administration policy that allows it beneficiaries — the undocumented who were brought here at children — to work and go to school in the U.S. legally, provided they stayed out of trouble and met other requirements.

Mendez was brought to the U.S. by his parents when he was 10 from Mexico. He attends Albright College in Reading, Pennsylvania. Mendez first received DACA status during his senior year of high school, and he renewed two years ago.

“It was almost like finding your identity. You were able to be somebody here instead of just being an illegal immigrant,” he said. But now, Mendez said he worries whether he will be able to stay in the United States, the land he considers his home. Trump has not said whether he will end the Obama-created “dreamers” program.

“I have some friends that have DACA as well, they’re concerned about losing their job, or not being able to go to college,” he said.

“People are worried, people are afraid, they’re not sure what to make of it yet,” Cardenas said.

But Cardenas noted that deportations have been a longstanding source of fear for undocumented immigrants. “Obama deported more people than the prior two presidents put together, they were happening a lot,” Cardenas said.

“Obama was more quiet about it. Trump seems to be more open to saying these things publicly.”

But a Washington,D.C.- based group that advocates for increased border control and immigration enforcement, the Federation for American Immigration Reform, said the Obama Administration was lax in its enforcement of immigration laws.

“For those who say there’s a sense of fear in communities because people fear deportation, that’s called deterrence. It’s the most important factor in immigration law enforcement and something this country has been missing for the past 8 years,” said Dave Ray, a spokesman for the group.

“People who are here illegally, particularly those who have committed felonies or in the deportation pipeline are being targeted for enforcement and removed from the country. This is the way things are supposed to work and this is what we’re paying ICE (Immigration and Customs Enforcement officers) to do.”

Ray forecast that the DACA program would be used as a bargaining chip in any comprehensive immigration reform bill proposed by Trump.

Amid the uncertainty and fear, Red Bank community leaders are considering a measure aimed at giving the undocumented a small measure of protection. At a meeting at the end of this month, Red Bank’s Human Relations Committee will discuss the possibility of having the borough designated as a so-called “sanctuary city.”

While the precise definition of sanctuary city is up for debate, the designation generally refers to cities that won’t cooperate with federal authorities seeking to deport the undocumented facing minor crimes.

Trump has pledge to prevent federal funding from flowing to such recalcitrant cities. If the Red Bank committee recommends the borough become a sanctuary city, the borough council would have to sign off on the measure.

“For a town like Red Bank to take a step like that eases fear,” Cardenas said.” These are people that have been part of the fabric of these downs for decades.”

In the past month, attorney Mejer and his firm have made two presentations in Red Bank, meeting with those who are concerned about their immigration status. His advice?

“Be informed, if you’re undocumented or illegal, go find out what your options are. If you know that you have an option and you just haven’t done anything, get it done now. If you have a green card and you haven’t filed for your citizenship, do it now.”