RED BANK: SQUARING OFF OVER IMMIGRATION

RED BANK: SQUARING OFF OVER IMMIGRATION

Red Bank Green – By JOHN T. WARD – With rallies before and afterward heavily favoring the rights of 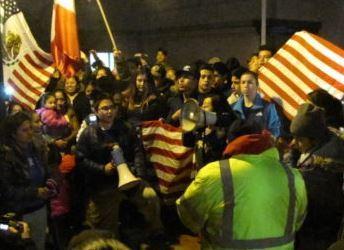 Short of declaring Red Bank a “sanctuary city,” the committee passed, by a 5-2 vote, a resolution that instead calls for town officials to “monitor and challenge” any costs arising from federal efforts to find and deport undocumented aliens.

Prior to the 6:30 p.m. meeting, several hundred pro-immigrant demonstrators gathered in the borough hall parking lot and chanted “love, not hate, makes America great” as police anticipated the arrival of an unknown number of pro-Trump protestors who had assembled at a supermarket on Route 35 in Middletown.

The two sides briefly faced off just inches apart with dueling chants, as those shouting “build the wall” were vastly outnumbered and nearly surrounded by the pro-immigrant side.

A similar scene played out after the meeting, when the two groups met again in the parking lot amid chanting and flag-waving. Police told redbankgreen that there no reports of violence or intimidation.

In between, the committee took comments from more than two dozen people on a resolution no one in the audience had yet seen. Here’s the document: RBHRC Resolution 022717

Rather than calling for, as previously reported, a “sanctuary city” designation — a loosely defined concept under which municipalities such as Jersey City and Princeton have stated their refusal to participate in amped-up efforts to deport undocumented aliens — the HRC’s proposal would “not in any way be defiant of federal law, so we don’t lose federal funding,” Chairman David Pascale told a standing-room-only crowd.

Under a January 25 executive order, the Trump administration said it would curtail funding to sanctuary cities because of their promises to shield unauthorized immigrants from federal action.

Committee member Sean Di Somma, who voted against the resolution with Mike Clancy, questioned its intent.

“Are we doing something that has a purpose, a tangible purpose?” he asked. Among other things, he said, the resolution appeared to be “telling the [police] chief how to do his job,” a characterization disputed by Pascale and committee member Kate Okeson.

“It would be a resolution of support for everyone who’s marginalized in our town, whether they’re undocumented immigrants” or not, Pascale said. The goal, he said, “is to not have people living in fear, when they go to school, when they go to work, when they’re driving around.”

That fear was often on display as 25 people made their way to the microphone during the public comment period, some of them speaking through tears.

A young woman named Jasmine would didn’t “feel safe” disclosing her address told the committee that she remembered crossing the Mexico-United States border as a six-year-old with her mother and “fearing I was going to die.”

Now, “I want to be a teacher, and I want to teach your kids U.S. history,” she said, turning to face the audience.”We didn’t come here to steal anything from you guys.”

Javier Veliz, a Red Bank Regional graduate and Oakland Street resident, spoke of how his mother, a single parent, struggled to raise him and his brother.

“I don’t like to see her come home, after working a 12-hour shift at B2 Bistro or at New Corner, crying and saying, ‘I’m going to lose my job… Trump said this… I’m going to have a backup plan to leave you money,’ ” he said. “I’m not going to live in this reality. My community is diverse. My community is supportive, and I know that just from being out here.”

Among the three audience members who spoke against the resolution’s passage, Shelly Kennedy of Atlantic Highlands told the committee it was putting “putting the citizens of Red Bank on the hook for millions of dollars” of lost federal funding.

Declaring Red Bank a “sanctuary city,” she said, would also serve as a “beacon” to criminal aliens, and if she was one of them, “I would go there, because I would be able to stay.”

Andrés Mejer, an immigration lawyer from Long Branch, advised the committee not to “get hung up on terminology” surrounding sanctuary cities.

“Are we as a society going to turn over somebody with a traffic violation for a potential removal?” he asked.

The measure now goes to the borough council for possible action.