New Proposed Rules on Public Charge under the Biden Administration 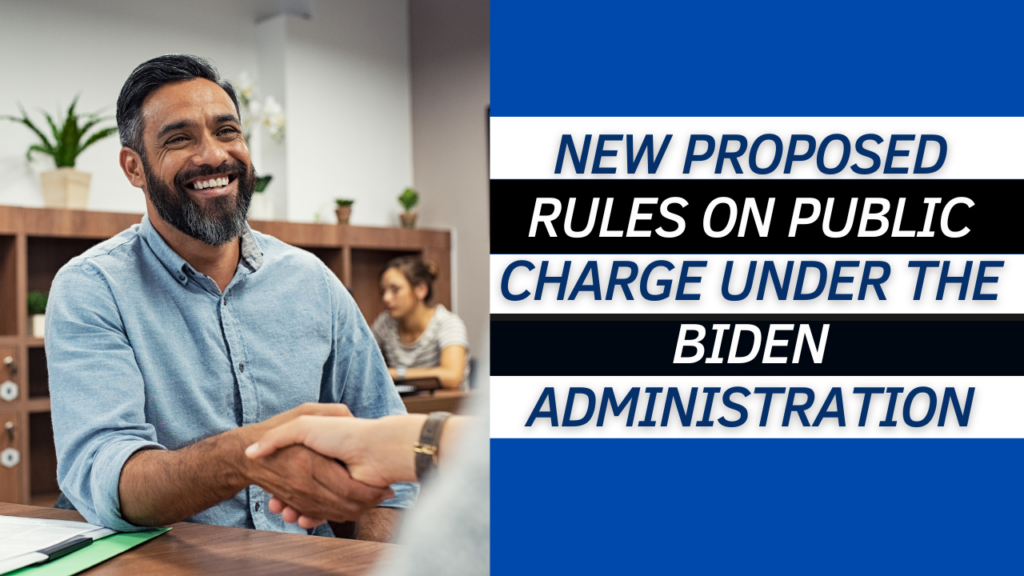 The Biden administration has proposed changes to the “public charge” ground for inadmissibility, overturning the Trump administration’s public charge rule, which was deemed by many people as a “wealth test” and dramatically shifted from the long-standing definition of public charge.

What are the Proposed Rules for Public Charge?

Proposed Rule # 1: Defining the Term “likely at any time to become a public charge”

The Department of Homeland Security (DHS) has proposed to define it as: “likely at any time to become primarily dependent on the government for subsistence, as demonstrated by either the receipt of public cash assistance for income maintenance or long-term institutionalization at government expense.”

The term “public benefits” refers to public cash assistance for income maintenance and long-term institutionalization at government expense (including when funded by Medicaid).

Focusing on these TWO will allow DHS to focus on people who could become primarily dependent on the government for subsistence without jeopardizing other benefit programs that serve significant public interests.

DHS believes this approach is consistent with the natural interpretation of the term “public charge” and easier to administer, in contrast to Trump’s  2019 Rules.

What is “Public Cash Assistance for Income Maintenance”?

The DHS recommended the following in defining Public Cash Assistance for Income Maintenance:

NOT ALL cash assistance will be considered for public charge purposes. If it does not constitute primary dependence it won’t be considered. This will be discussed later on in the video.

What is long-term institutionalization at government expense?

REMEMBER that this is the only type of Medicaid-funded service that is taken into account in public charge inadmissibility determinations. This means that Medicaid-funded home and community-based services (HCBS) will be excluded.

In addition, the DHS excluded from the definition those who were imprisoned owing to a criminal conviction or short periods of institutionalization for rehabilitation purposes.

The primary goal of noncash benefits was to provide supplemental help to low-income families.

The DHS has stated that the term “receipt (of public benefits)” should be defined separately from “likely at any time to become a public charge.

They define “Receipt of Public benefits” as a non-citizen as a listed beneficiary of a public benefit.  The following acts do not meet that definition:

In the 2019 Final Rule, some statutory minimum factors were weighted as negative or positive. DHS now deems that ineffective since it would result in too much information to be collected and then have to be evaluated by the agency.

The officer must weigh the totality of the applicant’s circumstances, not focusing on one factor only, in deciding whether an applicant may become a public charge.

For example, being disabled alone is not a sufficient basis to determine whether an applicant may become a public charge.

The DHS hopes that by making these changes the public charge will become easier for individuals to apply and for the agency to review and evaluate.

Do Your Circumstances Merit a Public Charge? Ask a New Jersey Immigration Attorney!

If you are unsure whether your circumstances merit you as a public charge, schedule a consultation with our New Jersey immigration attorneys at Andres Mejer Law and we will be happy to assess your case with you.

Welcome To America: An Immigrant’s Story: Immigrant Shooting survivor: U-Visa Process, U-Visa Solutions and what you should do Question 1 END_OF_DOCUMENT_TOKEN_TO_BE_REPLACED

Welcome To America: An Immigrant’s Story: Immigrant Shooting Survivors: What problems will they face? Question 1  Mark: Andres, this is END_OF_DOCUMENT_TOKEN_TO_BE_REPLACED