What is the cost of hiring a notario for immigration case? 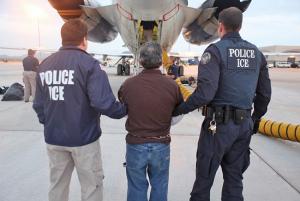 Just ask George (whose name was changed to protect his privacy).  I spent most of Friday visiting him and his cousin Sebastian in different detention centers in New Jersey.

How did George and Sebastian get detained by Immigration Customs Enforcement?

March 1, 2015 in the middle of the night ICE showed up at George’s house with an order for his arrest.  Once inside the house, they asked everyone for their legal status.  Sebastian has an order of removal since he failed to appear to his court hearing.  ICE arrested both George and Sebastian.

How did ICE know where to find George?

George has been in the U.S. for 15 years.  About four months ago he hired a notario to prepare a Deferred Action for Childhood Arrivals petition for him.  He met all the requirements, but in 2007 he was convicted of driving under the influence of alcohol (“DUI”).  He told the non-attorney of his conviction.  The notario told him, “don’t worry that was eight year ago.  You are fine now.”  He instructed George to get the court disposition and letter from the police of good conduct.  With those two items, the notario promised to get him approved.

There was and remains ZERO change of getting DACA approved with a DUI conviction.  I have written about this extensively.  Immigration didn’t have to wait for George to get fingerprinted; the notario was kind enough to provide the disposition showing the conviction.  A simple google search would have shown the notario this wouldn’t work. This was a very expensive mistake.  If the notario was an attorney he can be sued for malpractice and ethics violations.  This level of incompetence is not acceptable.

George is being detained.  Sebastian may be deported in a short time unless he qualifies for different relief.  He will have to immediately move to stay his removal.

What can George do now?

George needs to see what relief he qualifies for.  Unlike George, you can go to www.QualifyForLegalStatus.com, answer the questions, and you will be told if you likely qualify for relief.  George will have to request a bond redetermination to be able to get out of detention.  Then we have to evaluate whether a Post-Conviction Relief motion is possible.  At the moment, that seems the only way he will be able to qualify for DACA.

What did the notario cost George?

Was it worth it?  What is the value of the knowledge an immigration attorney could have given George? How expensive is it really to consult with an attorney?  What is your freedom worth?  Only you can answer those questions

Ms. Libia B married a man that was extremely older in age. Mr. Francisco filed for Libia’s adjustment on March 5, END_OF_DOCUMENT_TOKEN_TO_BE_REPLACED

Mr. Mora’s wife had abandoned him with his three children. Mr. Mora was a single parent and maintained a full END_OF_DOCUMENT_TOKEN_TO_BE_REPLACED

Irma and her daughter were abandoned by their husband/father who stole assets and moved to Puerto Rico.  He abandoned property, END_OF_DOCUMENT_TOKEN_TO_BE_REPLACED